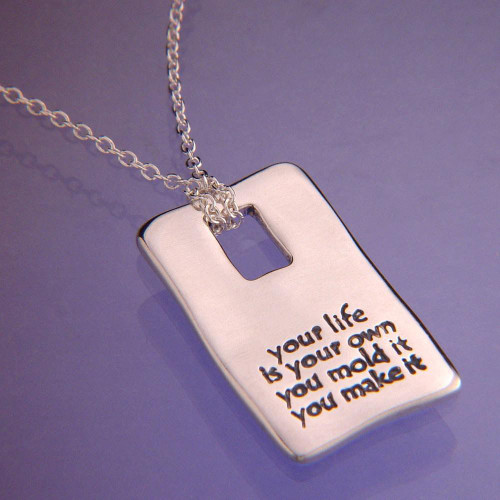 Your Life Is Your Own Sterling Silver Necklace - Inspirational Jewelry

Often cited as one of the most admired figures of the 20th century, Eleanor Roosevelt was a tireless advocate for the rights of the disadvantaged. She was also an advocate of human rights, especially those involving women and civil equalities. Her own words engraved here show her determined spirit and her belief that one can take charge of one's own life. Her eulogist, Adlai Stevenson, described Eleanor as someone "who would rather light a candle than curse the darkness." She lived as she advocated that others live.

Eleanor Roosevelt: "Your life is your own, you mold it, you make it." Sterling Silver, Pendant: 1" long, Chain length: 18"