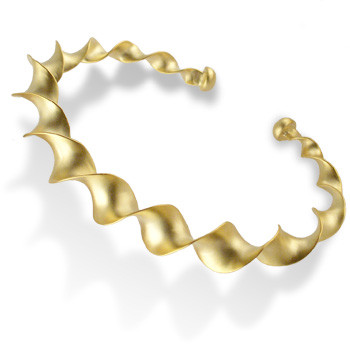 from the collections of the National Museum of Scotland
300-100 BC
Scotlands most important Iron Age gold hoard was discovered in 2009 near the town of Stirling by David Booth and his metal detector. The buried treasure consisted of four gold torcs; neck ornaments dating to around 300-100 BC (towards the end of the Iron Age). Alongside tubular torc fragments and one torc of twisted wires were two made of fine, twisted gold, a style known as ribbon torcs on which this jewellery is based.
Materials: Brass with gold finish