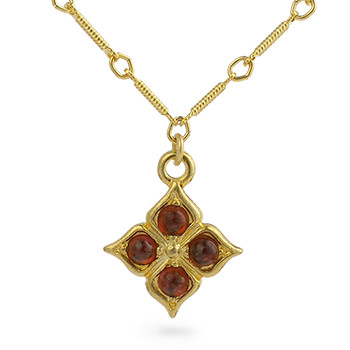 GARNET
From the Latin Granatum

Garnet is a semi-precious stone which ranges in color from the common red to the less common green or black. The name is derived from granatum, the Latin word for pomegranate. In ancient Egypt red garnet, the color of blood (symbolizing life), was highly valued and was often combined with other stones to create amulets with religious or mystical meaning. Garnet is sometimes regarded as a talisman of faithfulness, hope and true friendship. It can be found in many parts of the world including the United States.