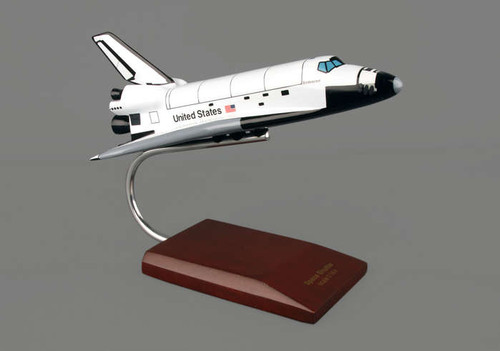 Our premium high quality air & space museum replicas and naval models are handcrafted from mahogany and comes with a wooden base. Dimensions are 10(L) X 6 1/4" (Wingspan).

Space Shuttle Endeavour (Orbiter Vehicle Designation: OV-105) is one of the retired orbiters of the NASA Space Shuttle Program the space agency of the United States. Endeavour was the fifth and final spaceworthy NASA space shuttle to be built constructed as a replacement for Challenger. Endeavour first flew in May 1992 on mission STS-49 and its last mission STS-134 was in May 2011. The STS-134 mission was originally planned as the final mission of the Space Shuttle program but with authorization of the STS-135 mission Atlantis became the last Space Shuttle to fly.

Endeavour was named through a national competition involving students in elementary and secondary schools. Entries included an essay about the name the story behind it and why it was appropriate for a NASA shuttle and the project that supported the name. Endeavour was the most popular entry accounting for almost one-third of the state-level winners. The national winners were Senatobia Middle School in Senatobia Mississippi in the elementary division and Tallulah Falls School in Tallulah Falls Georgia in the upper school division. They were honored at several ceremonies in Washington D.C. including a White House ceremony where then-President George H.W. Bush presented awards to each school.