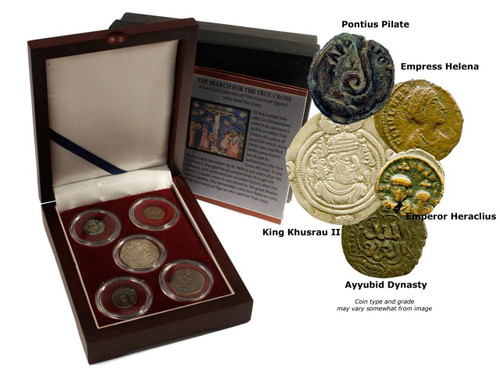 Search for the True Cross: 5 Ancient Coins of the Historical Figures who held the Cross  : Authentic Artifact

This collection features five genuine ancient coins, one from each of the historical figures associated with the True Cross. Five-Coin Collection of Five Historical Figures Who Held The Cross

Of the myriad holy relics in Christendom, none is as sacrosanct as the so-called True Cross—the piece of wood on which Jesus Christ was crucified. While some historians doubt its authenticity, the True Cross did exist. It was discovered in Jerusalem by St. Helena 300 years after the Crucifixion, changed hands several times through the centuries, and vanished from recorded history after the Second Crusade, when it was seized by the great Muslim warrior Saladin. This remarkable collection features coins of the five historical figures who held the True Cross.