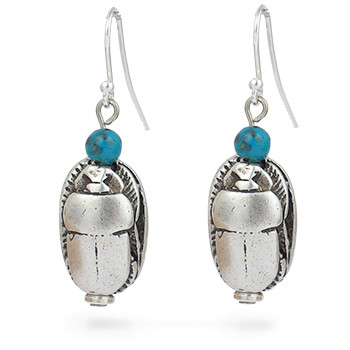 The scarab beetle rolls its food into a ball, suggesting to the ancient Egyptians the rolling of the all-powerful sun across the sky. Thus the scarab became the symbol of the sun-god. The beetle, which lives underground, was believed to be reborn every day at noon when it came to the surface to take flight. The scarab became the symbol of resurrection and eternal life. To commemorate specific events, a seal was carved in the form of a scarab with the date and event inscribed on its back.