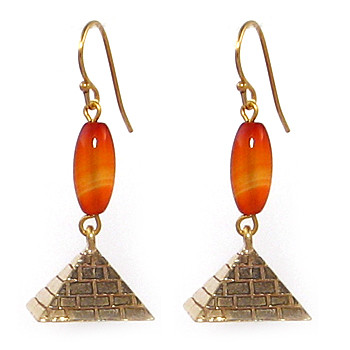 PYRAMIDS
Pyramids were prevalent in many diverse ancient civilizations. Historical records indicate that the Red Pyramid located in Dahshur, Egypt was the first successfully built pyramid. Ancient architects favored the inherent structural advantages of the pyramid, as the majority of the weight was distributed to the wide base, which in turn offered great stability. These structures were often built by thousands of slaves as monuments or tombs for fallen members of royalty.
Materials: gold-finish pyramid & earwire, red agate.