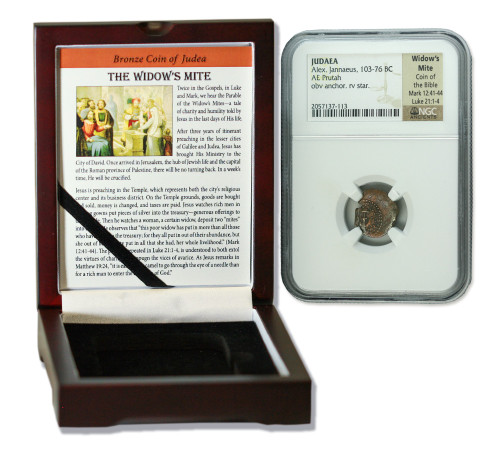 Bronze prutah of Alexander Janeaus, king of Judaea, minted ca. 100 BCE. The widows mite mentioned in the Gospels of Mark and Luke  Jesus parable about a poor widow who gave two mitesall she had.

As we say "Own a piece of history...Give a piece of history™". This coin is an actual bronze coin, certified genuine, minted in the Holy Land over 2000 years ago during the reign of King Alexander Jannaeus in the century preceding the birth of Jesus. What makes these coins of great historical and religious importance is that twice in the Bible, Jesus is quoted as telling the story of the poor widow who gave all that she had which was just two mites. The coin enclosed is identical to the type of coin she would have had. These coins have been known to collectors for hundreds of years as “Widow’s Mites”

These coins are an actual part of the historical record— a unique, ancient artifact that was handled and used in market stalls by villagers, desert traders, holy men, and Roman soldiers alike in every day transactions.

Although it is common to view in museums, it is a rare opportunity to actually hold an object of this age and importance in your hands. These coins typically circulated for very long periods and most specimens became worn smooth. It is because of the discovery of an ancient hoard that a limited number of coins of this superb level of preservation are available.

Twice in the Gospels, in Luke and Mark, we hear the Parable of the Widow’s Mites — a tale of charity and humility told by Jesus in the last days of His life.

After three years of itinerant preaching in the lesser cities of Galilee and Judea, Jesus has brought His Ministry to the City of David. Once arrived in J erusalem, the hub of Jewish life and the capital of the Roman province of Palestine, there will be no turning back. In a week’s time, He will be crucified.

Jesus is preaching in the Temple, which represents both the city’s religious center and its business district. On the Temple grounds, goods are bought and sold, money is changed, and taxes are paid. Jesus watches rich men in flowing gowns put pieces of silver into the treasury—generous offerings to the Temple. Then he watches a woman, a certain widow, deposit two “mites” into the till. He observes that “this poor widow has put in more than all those who have given to the treasury; for they all put in out of their abundance, but she out of her poverty put in all that she had, her whole livelihood.” (Mark 12:41-44). The parable, repeated in Luke 21:1-4, is understood to both extol the virtues of charity and impugn the vices of avarice. As Jesus remarks in Matthew 19:24, “it is easier for a camel to go through the eye of a needle than for a rich man to enter the kingdom of God.”

Mite is the 1611 King James translation for the Greek λεπτον, or lepton. The “widow’s mites” mentioned in the Scriptures are thought to have be either leptons or perhaps similar, slightly larger variations called prutahs. These tiny bronze coins were the smallest and lowest denominations that circulated throughout the Holy Land during the lifetime of Jesus Christ. The most common of these types were struck during the reign of Alexander Jannaeus, one of the last Jewish kings before the Roman annexation of Judaea. Most leptons and prutahs were very crudely made, usually off center on irregular flans. The resulting coins frequently show minimal imagery. Both the leptons and prutahs are called star-anchor types; one or both sides will often show partial images of an anchor and/ or a six or eight-pointed star. The anchor design was adopted
from the Seleucids, who used it to symbolize their naval power. The star, with or without a surrounding circular diadem, symbolizes Heaven.