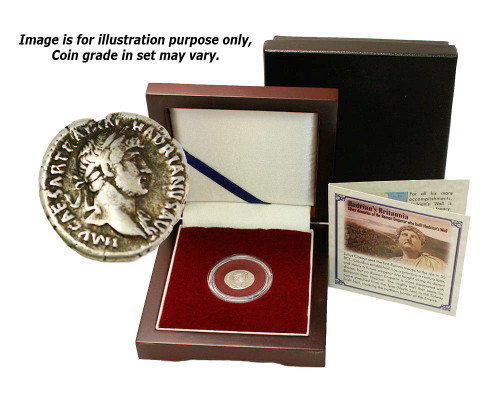 Julius Caesar sent the first Roman troops to the isle in 55 BCE, Claudius established it as a province a century later, and many a future emperor first fought along its distant shores, but no Roman Emperor is more associated with Britannia than Hadrian. The mighty wall that bears his name stretched from the Tyne (North Sea) to the Solway (Irish Sea), marking the northern border of the Empire. Born in Spain in 76 CE, Hadrian ascended to the throne upon the death of Trajan in 117. Part military man, part philosopher-king, the new emperor toured the length and breadth of his empire, establishing order, drilling troops, and engaging in battle, famously crushing a Jewish revolt in Palestine in 130. He is considered one of the Five Good Emperors. A devotee of ancient Greece, he pushed for Athens to be the cultural capital of the Empire, constructing many opulent buildings there. In Rome, he re-built the famed Pantheon, with its distinctively Hellenistic look. His admiration of all things Greek extended to his personal retinue. He took as a companion a comely Grecian boy named Antinous. When the youth drowned in 130, the Emperor was so distraught, he deified the boy—an unprecedented move for individuals outside of the royal family. For all his many accomplishments, Hadrian’s Wall is his greatest legacy. Stretching 80 Roman miles from coast to coast, the wall itself was eight feet wide and 15 feet high. Garrisons called milecastles were built every mile to quarter troops, and towers were placed every third of a mile. The finished wall was covered in white plaster and then white-washed, so the massive fortification gleamed in the sun. While there is some doubt of the wall’s necessity in repelling the Picts from invading from the north, the effort was by and large successful. Its ruins remain Northern England’s most popular tourist attraction.