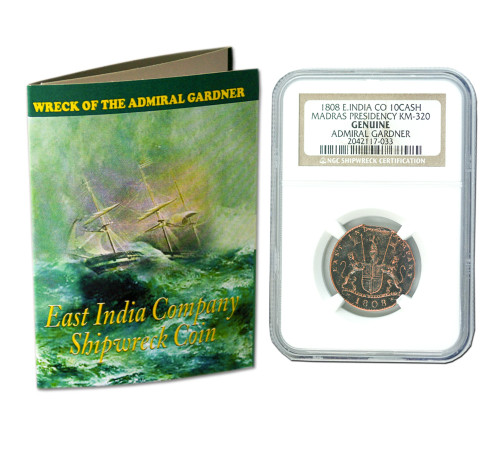 This coin was on the bottom of the English Channel for almost 200 years. It was part of the cargo of the Admiral Gardner, an East India Company ship bound for Madras that sunk during a storm in 1809. The East India Company was the most powerful corporate entity that ever existed, and this coin is one of the first massproduced issues in history. Despite bitter cold, gale-force winds, and an ominous black sky, three ships owned by the East India Company—the Brittania, the Carnatic, and the Admiral Gardner—embarked on the long journey from London to the East Indies. The latter, a three-masted brig, was loaded with some 46 tons of copper coins struck at the Soho Mint, for the Company’s use in Madras, India. Rounding Margate, some 80 miles from London, the winds abruptly stopped, and so did the progress of the ships. The crews dropped anchor, to avoid drifting into the notorious Goodwin Sands. All was calm briefly, until the gale suddenly intensified. The anchors found no purchase in the shifting seabed, and after a valiant effort by the crew, all three ships sunk into the sand, just after midnight on January 25. Although the wreck of the Admiral Gardner was part of local lore, no trace of the ship was found until 1984, when a passing fisherman snagged his nets on the wreckage. A year later, a team of divers salvaged some—but not nearly all—of the lost treasure, including a sealed barrel containing some 28,000 pieces. This coin is one of them. This “10-cash” coin bears the East India Company’s iconic logo on the obverse and the denomination on the reverse. The contrast of the regal coat of arms and the Mughal script hints at the breadth and scope of both the Company and the British Empire. Struck in Birmingham, England, this coin was one of the first in the world to be minted by the steam-powered coin press, an invention of Matthew Boulton and James Watt. It spent 175 years under the sea.

Actual Authentic Artifact(s). As actual artifacts and no two are exactly alike and items will slightly vary from photos shown.