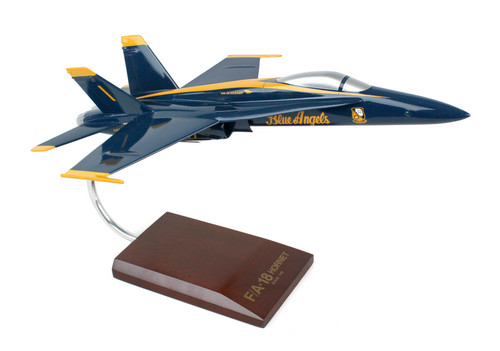 Our premium high quality air & space museum replicas and naval models are crafted from plastic and comes with a wooden base. Dimensions are 14(L) X 13"(H) X 10 1/4"(Wingspan).

The United States Navy's Navy Flight Demonstration Squadron popularly known as the Blue Angels first performed in 1946 and is currently the oldest formal flying aerobatic team. The mission of the Blue Angels is to enhance Navy and Marine Corps recruiting and credibly represent Navy and Marine Corps aviation to the United States and its Armed Forces to America and other countries as international ambassadors of good will. The squadron's six demonstration pilots fly the F/A-18 Hornet in more than 70 shows at 34 locations throughout the United States each year where they still employ many of the same practices and techniques used in their aerial displays in 1946. Since their inception the "Blues" have flown a variety of different aircraft types for more than 427 million spectators worldwide."