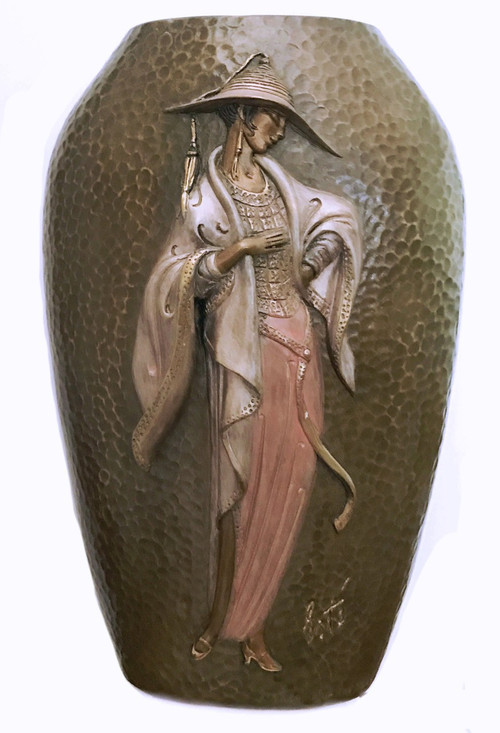 Erté - Romain de Tirtoff (23 November 1892 – 21 April 1990) was a Russian-born French artist and designer known by the pseudonym Erté, from the French pronunciation of his initials. He was a 20th-century artist and designer in an array of fields, including fashion, jewellery, graphic arts, costume and set design for film, theatre, and opera, and interior decor. Tirtoff was born Roman Petrovich Tyrtov in Saint Petersburg. In 1910–12, Erte moved to Paris to pursue a career as a designer. In Paris he lived with Prince Nicolas Ouroussoff (December 17, 1879 – April 8, 1933) up until the prince's death in 1933. The decision to move to Paris was made despite strong objections from his father, who wanted Romain to continue the family tradition and become a naval officer. Romain assumed his pseudonym to avoid disgracing the family. He worked for Paul Poiret from 1913 to 1914. In 1915, he secured his first substantial contract with Harper's Bazaar magazine, and thus launched an illustrious career that included designing costumes and stage sets. Between 1915 and 1937, Erté designed over 200 covers for Harper's Bazaar, and his illustrations would also appear in such publications as Illustrated London News, Cosmopolitan, Ladies' Home Journal, and Vogue. Erté is perhaps most famous for his elegant fashion designs which capture the art deco period in which he worked. One of his earliest successes was designing apparel for the French dancer Gaby Deslys who died in 1920. His delicate figures and sophisticated, glamorous designs are instantly recognisable, and his ideas and art still influence fashion into the 21st century. His costumes, programme designs, and sets were featured in the Ziegfeld Follies of 1923, many productions of the Folies Bergère, Bal Tabarin, Théâtre Fémina, Le Lido and George White's Scandals. On Broadway, the celebrated French chanteuse Irène Bordoni wore Erté's designs. In 1925, Louis B. Mayer brought him to Hollywood to design sets and costumes for the silent film Paris. There were many script problems, so Erté was given other assignments to keep him busy. Hence, he designed for such films as Ben-Hur, The Mystic, Time, The Comedian, and Dance Madness. In 1920 he designed the set and costumes for the film The Restless Sex starring Marion Davies and financed by William Randolph Hearst. By far, his best-known image is Symphony in Black, depicting a somewhat stylized, tall, slender woman draped in black holding a thin black dog on a leash. The influential image has been reproduced and copied countless times. Erté continued working throughout his life, designing revues, ballets, and operas. He had a major rejuvenation and much lauded interest in his career during the 1960s with the Art Deco revival. He branched out into the realm of limited edition prints, bronzes, and wearable art. Two years before his death, Erté created seven limited edition bottle designs for Courvoisier to show the different stages of the cognac-making process, from distillation to maturation. In 2008, the eighth and final of the remaining Erte-designed Courvoisier bottles, containing Grande Champagne cognac dating back to 1892, was released and sold for $10,000 apiece. Erte's work may be found in the collections of several well-known museums, including the Victoria and Albert Museum, the Metropolitan Museum of Art, and the Los Angeles County Museum of Art (LACMA); as well, a sizable collection of work by Erté can be found at Museum 1999 in Tokyo.