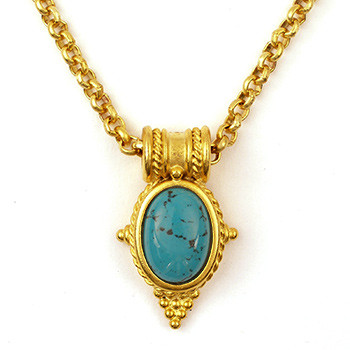 Adaptation of ancient jewelry became very popular in Europe in the mid 19th century. The Castellani workshop in Naples, with Henry Walters visited in 1909, was famous for this style of jewelry. Our Egyptian Revival collection, featuring real turquoise cabochons, is inspired by a necklace that was made in the Castellani workshop. In ancient Egypt, lapis was highly regarded as a stone of celestial origin and as a symbol for truth. The original necklace was made of gold with carved gemstone cabochons.