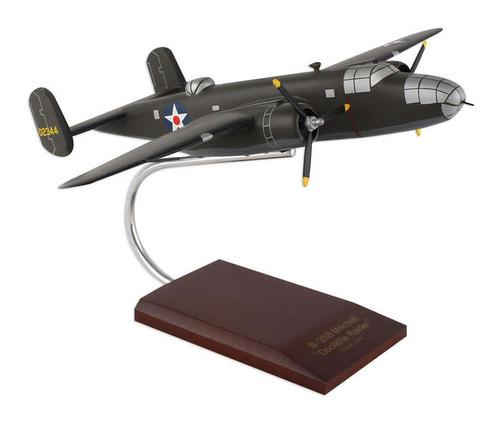 Our premium high quality air & space museum replicas and naval models are handcrafted from mahogany and comes with a wooden base. Dimensions are 13 1/2(L) X 15 1/2"(Wingspan).

The North American B-25 Mitchell was an American twin-engined medium bomber manufactured by North American Aviation. It was used by many Allied air forces in every theater of World War II as well as many other air forces after the war ended and saw service across four decades.

The B-25 was named in honor of General Billy Mitchell a pioneer of U.S. military aviation. By the end of its production nearly 10000 B-25s in numerous models had been built. These included a few limited variations such as the United States Navy's and Marine Corps' PBJ-1 patrol bomber and the United States Army Air Forces' F-10 photo reconnaissance aircraft.