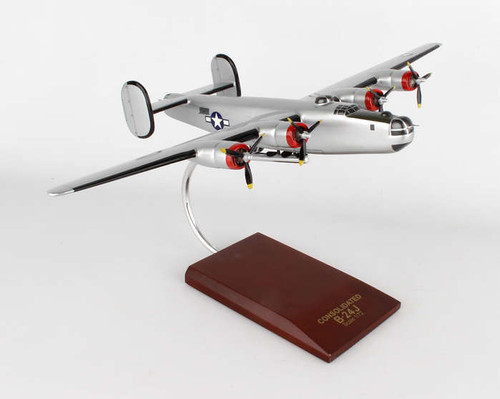 Our premium high quality air & space museum replicas and naval models are handcrafted from mahogany and comes with a wooden base. Dimensions are 12(L) X 18 1/2"(Wingspan).

The B-24 Liberator was an American heavy bomber designed by Consolidated Aircraft of San Diego California. It was known within the company as the Model 32 and a small number of early models were sold under the name LB-30 for Land Bomber. The B-24 was used in World War II by several Allied air forces and navies and by every branch of the American armed forces during the war attaining a distinguished war record with its operations in the Western European Pacific Mediterranean and China-Burma-India Theaters.

The United States Army Air Forces (USAAF) took delivery of its first B-24As in 1941. The sole B-24 in Hawaii was destroyed by the Japanese attack on Pearl Harbor on 7 December 1941. Like the RAF the USAAF used them as transports at first. American B-24s entered combat service in 1942 when on 6 June four B-24s from Hawaii staging through Midway Island attempted an attack on Wake Island but were unable to find it. On 12 June 1942 13 B-24s flying from Egypt attacked the Axis-controlled oil fields and refineries around Ploiesti Romania.