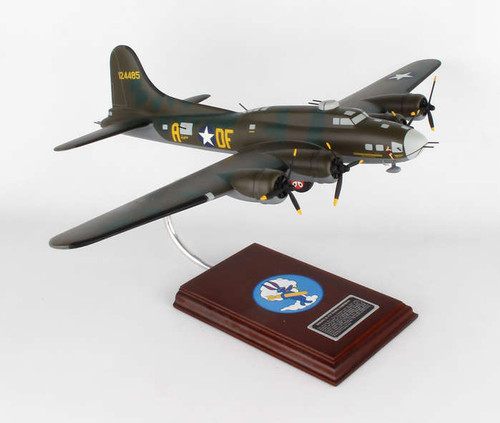 Our premium high quality air & space museum replicas and naval models are handcrafted from mahogany and comes with a wooden base. Dimensions are 16.5(L) X 10"(H) X 23"(WSP).<'/p>

The Memphis Belle a B-17F Flying Fortress is one of the most famous aircraft in history. In May 1943 it became the first U.S. Army Air Forces heavy bomber to complete 25 missions over Europe and return to the United States.

Flying in the 324th Bomb Squadron of the 91st Bomb Group (Heavy) the Memphis Belle and its crew of 10 flew their first combat mission on Nov. 7 1942. Until the arrival of long-range fighters later in the war USAAF heavy bombers often flew without escort for part of their missions. Faced with hordes of enemy aircraft deadly antiaircraft fire and the lack of friendly fighters in the target area it was highly unlikely that a bomber crew would finish their required 25 missions.