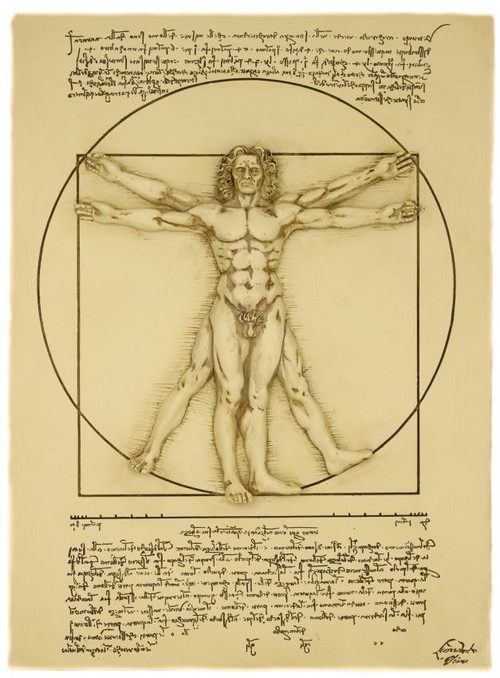 EXCLUSIVE for MUSEUM STORE COMPANY : The Vitruvian Man is on of the most famous and notable drawings and accompanying notes from Leonardo da Vinci';s journal entries of around 1487. It depicts a naked male figure in two superimposed positions with his arms and legs apart and simultaneously inscribed in a circle and square. Also know as the Canon of Proportions or the Proportions of Man. It is held in the Gallerie dell'; Accademia in Venice, Italy.

The Virtruvian Man provides insight into Leonardo';s keen interest in proportion. Leonardo believed the workings of the human body to be an analogy for the workings of the universe. According to the accompanying notes, the work was made as a study of the proportions of the (male) human body as described in a treatise by the Ancient Roman architect Vitruvius (Vitruvius De Architectura), who wrote that in the human body:

aVinci';s Vitruvian (Vetruvian, Vertruvian) drawing symbolizes the essential symmetry of the human body, and by extension, to the universe as a whole.