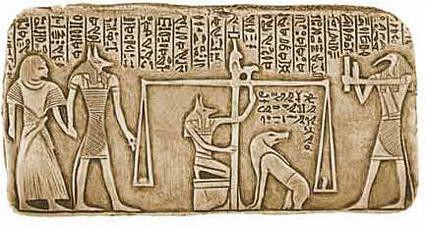 This relief represents the ceremony of the weighing of the heart in the hall of judgement after death. The deceased is introduced into the hall of judgment by the jackal-headed God Anubis. His or her heart is placed in one of the pans of a scale to be weighed against the feather of truth of the Goddess Maat. Anubis then adjusts the plummet while Thoth, generally shown as Ibis-headed, writes down the verdict. Nearby a demon, "the Eater of Hearts", a composite of crocodile, lion and hippopotamus waits for a verdict against the deceased, when the heart will then be thrown to it. Upon a satisfactory verdict the deceased is then led by Horus before Osiris. The deceased is presented as one true of voice, justified and a suitable candidate to be admitted into the joys of the netherworld. Original piece location is the British Museum, London and was a gift of King Edward VII.