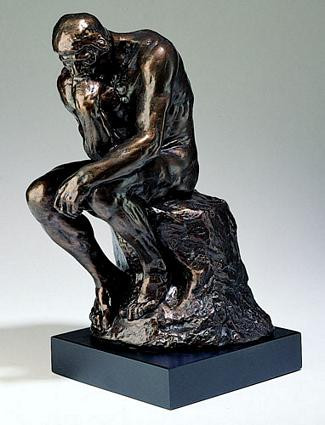 The Thinker is part of Auguste Rodin's major work, Gate to Hell. The work was planned as an ornamental door for the proposed Palace of Decorative Arts. After his visit to Italy in 1875, the sculptor read Dante's Divina Comedia and was inspired to do groups from the poems. Today, The Thinker is Rodin's best known work and one of the most famous sculptures in the world. It was received with critical opposition which can be summed up in the sentence, "A fine brute-but no thinker." Rike, however, with the keen and sensitive perception of a poet, had this to say in his description of Gate to Hell: "Above the crossbeams sits the figure of spectacle, because he thinks. He sits forlorn and mute, heavy with images and ideas, and all his strength (the strength of a man of action) thinks. His entire body has turned into a skull and all the blood in his veins into brains..."