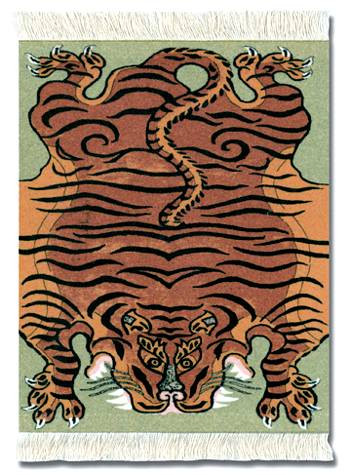 Tibetan rugs were virtually unknown outside Tibet until the mass exodus of refugees following the 1959 uprising. Originally, tiger skins were used by senior Buddhist lamas as seats during meditation, to symbolize their ability to control wild impulses or powerful desires. Stylized woven rugs replaced pelts in the early nineteenth century when pelts became scarce and as Buddhist compassion towards living things became more pronounced. Associated with high status and bravery, use of the woven tiger rug was restricted to the elite and members of the aristocracy as an indication of power and authority. Nineteenth and early twentieth century rugs are very rare; less than two hundred of the original woven rugs have survived. Today, however, Tibetan refugees are using their weaving skills to produce tiger rugs outside their native land.