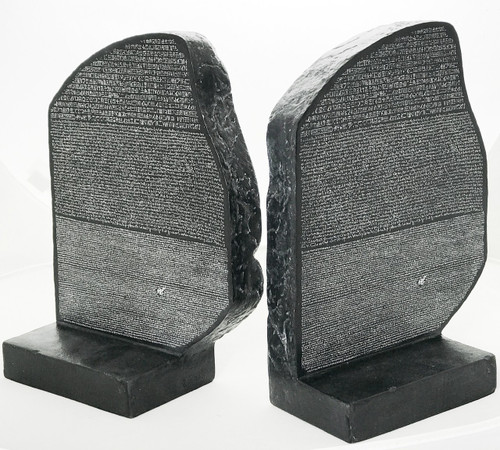 When the last temple was closed in the 6th century A.D., the skill of reading hieroglyphs was lost until the discovery of this slab of basalt stone found at Rosetta in the western delta in 1779. On the stone are three scripts. The bottom section is in Greek, the center in demotic (popular script originated in the XXVI dynasty, 700-600BC and widely used for the next thousand years), and the top in hieroglyphs. The stone was first set up in a temple. It was an elaborate "thank you" to the Greek ruler of Egypt, Ptolemy V, who reigned in the 2nd century B.C., for favors that he had given to the priests. The three scripts contained the same text, allowing the hieroglyphs to be translated. French archaeologist, Jean-Francois Champollion spent many years deciphering the symbols of the Rosetta stone. Champollion's work in the Rosetta stone was an important breakthrough in the translation of Egyptian hieroglyphs. The stone was taken by the French, and upon Napoleon's defeat was transfered under the Treaty of Alexandria to Brittian which has held the stone in London's British Museum ever since. However, the Egyptian goverment claims the Rosetta Stone as property of Egypt and has requested what it believe should be its rightful return.