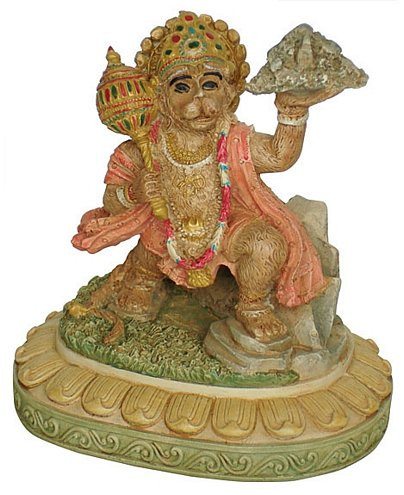 In Hinduism, Hanuman (known also as Anjaneya, son of Anjana) is the monkey deity renowned for his courage, power and faithful, selfless service. Legend has is that Hanuman was born from the King and Queen of the Monkeys, which explains his monkey face. When he was born, he was so hungry he chased the sun across the heavens until he was eventually struck by lightning. The Hindu gods decided to make Hanuman an immortal and grant him with fantastic powers. As a young boy, Hanuman got into much mischief and abused the powers given to him by tormenting various saints. The gods saw a need to discipline Hanuman and they decided to make Hanuman forget that he had his powers. When he was older, he was reminded by the King of Bears that he had amazing powers such as strength and the ability to enlarge or shrink himself. For the rest of his life, Hanuman continued to go on amazing adventures and helped many people on his journeys. Like Hercules, Hanuman is a hero.