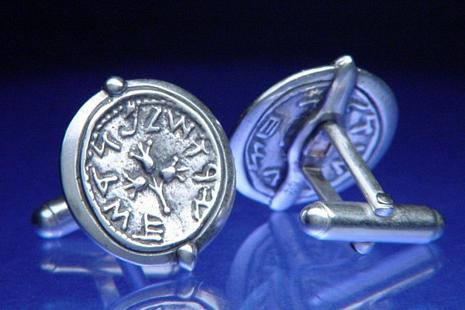 Adapted from a coin in the collection of The Jewish Museum, New York The Jewish Museum is under the auspices of the Jewish Museum Theological Seminary of America. In 66 CE, the Jews rebelled against Roman rule and began to mint their own coins, called shekels, as a sign of their independence. The coins in these cufflinks were cast from a half-shekel in The Jewish Museum collection which dates to the first year of the revolt. The imagery and inscriptions are entirely Jewish in nature: a chalice with an ancient Hebrew inscription denoting the date and denomination; and a branch with pomegranates, one of the Seven Species of Israel, surrounded by the inscription, "Holy Jerusalem.'