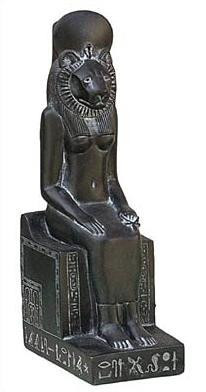 Together with her husband Ptah and her son Nefertem, Sekhmet made up the Memphis Triad. Her name meant "The Mighty One". Her nature being that of a Goddess of War, she accompanied the King to battle and was often described as his mother. She spread terror everywhere; the henchmen of Seth and even the serpent Apophis succumbed to her. Sekhmet was represented as a lioness or as a woman with lion';s head. Her weapons were arrows "with which she pierces hearts" and a fiery glow emanated from her body. The hot desert winds were regarded as the Goddess';s hot breath. She was connected with the fire-spitting Uraeus of the King and thereby became the "Eye of Ra". Sekhmet was also regarded as the one "Great of Magic" whose knowledge of sorcery gave her a place in the service of healing.