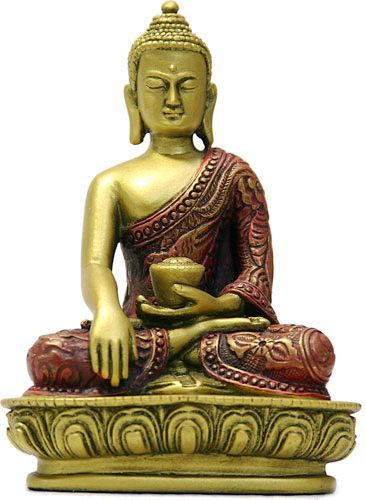 Here Buddha is depicted in the Earth Touching pose . As the Buddha drew near to his enlightenment experience, he was assailed by the forces of temptation (Mara). He remained steadfast, however, and reached down to call upon the Earth to witness his vow to be unmoved by any temptation. Thus, it is a gesture of determination, reflecting the immovable, unshakable aspect of meditation. Gautama Buddha was born in 563 B.C. in northeast India. The Buddha was the son of the King of the Sakyas. Suddhodana, who ruled at Kapilavastu, on the border of Nepal. His mother was Queen Maya. He was named Siddartha. He lived amidst the pleasures of palace life and at age 16 he was married to Princess Yasodhara. They had a son named Rahula. After seeing a decrepit old man, an invalid, and an ascetic beggar, he learned of suffering and decided to embrace asceticism. Soon afterward, at age 29, Siddhartha left the palace and his family and went to a hermitage where he became monk Guatama, or, as he is still called, Sakyamuni (The ascetic of the Sakyas). One day, meditating under a sacred fig tee, he attained perfect illumination (Bodhi). He had become a Buddha. From there on he traveled and preached for 44 years what was to become one of the main religions of the world. He died at Kusinagara at age 80.