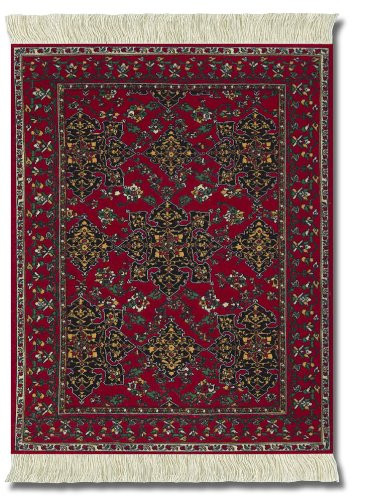 According to documentary sources, large medallion carpets (of which the Turkish Star Ushak is a variant type) were woven in the western Anatolian town of Ushak, known for carpet weaving since the fifteenth century. A number of other carpet designs, including the star medallion pattern of this rug, are found in pieces which generally have wool, coloring, specific design elements, and technical features similar to the medallion Ushaks; these carpets can be assigned to the Ushak region as well. The Star Ushak is named for the large star-shaped medallions which alternate with smaller diamond-shaped units. The two elements are arranged, alternating in staggered rows, in the fashion of the earlier Holbein and Lotto rugs. But the decorative vocabulary of the Ushaks--the medallion shapes, the arabesque forms filling them, and the vines and small-scale floral elements filling the interstices between the medallions--marks a total departure from the tradition represented by the Holbeins, Lottos, and their predecessors. This abrupt change often has been attributed to Persian influence resulting from the capture of Safavid artists by the Ottomans who sacked Tabriz in 1514. It recently has been suggested that, although Persian influences did play a role, the transformation actually took place in the third quarter of the fifteenth century under court direction. The earliest Ushaks may thus represent Ottoman court products in which cartoons drawn by court artists were used. In the sixteenth and seventeenth centuries, a tremendous demand for various types of Ushaks developed in Europe. The first Star Ushak appears in a painting of 1534 and representations continue into the seventeenth century. The popularity of the star design in the west is attested to by the number of examples in paintings, by the apparent quantity exported to Europe, and by European copies of the design--carpets dated 1584 and 1585 at Boughton House, Northamptonshire, England. The St. Louis rug has a well-balanced field design and effective coloring. Dark blue medallions are set against a red ground. Although showing signs of its age, it is an unusually small and finely woven example. It has been suggested that the small Star Ushaks were ordered especially for use in Transylvanian churches; an example only slightly larger than the St. Louis rug adorns the Black Church of Brasov.

The Metropolitan Museum of Art, gift of Joseph V. McMullan, 1958