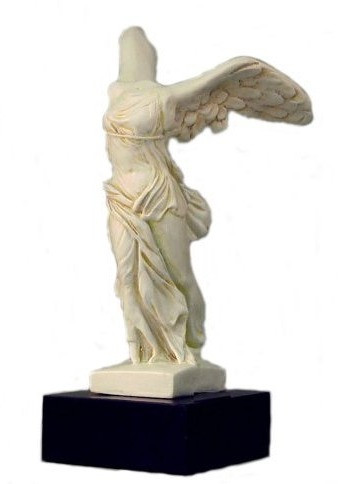 The marble statue of the Winged Victory of Samothrace (Nike of Samothrace) was discovered in 1863 on the island of Samothrace by French consul and amateur archaeologist Charles Champoiseau. The statue is now displayed in the Louvre in Paris.

In Greek mythology, Nike was regarded as the bestower of victory, both in war and in contest. As a war goddess she was often represented standing alongside Zeus, Athena and Ares. As goddess of contests, she typically is portrayed adorning the winner with a victor';s wreath and/or sash.

The statue of Nike is one of the greatest surviving sculpture masterpieces of the Hellenistic period, even though it is significantly damaged - most significantly missing its head and outstretched arms. Since its original discovery in 1863 is has been reassembled and rebuilt, with the right wing being a symmetrical cast plaster version of the left. Many pieces, including a hand have been found at the site, but the arms nor the head were never located.

Created by an unknown sculptor (Rhodian in origin), the piece is dated between period 220-190 BCE, though certain scholars think it could have been created as early as 250 BCE (or even 288 BCE) or as late as 180 BCE .

An inscription on the base of the statue includes the word "Rhodhios" (Rhodes), indicating it was commissioned to celebrate a naval victory by Rhodes, but again other scholars believe it was an offering donated by the Macedonian general Demetrius I Poliorcetes after his naval victory at Cyprus, however this would date the statue an even earlier 288 BCE.