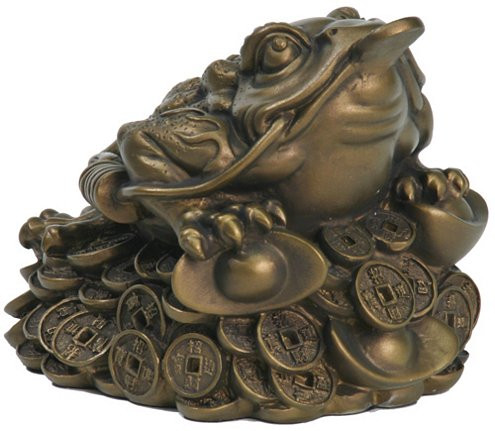 The three legged Money Frog (called "Chan Chu" in Chinese) it's the most significant symbol of prosperity in Feng Shui. The toad is often sitting on top of a bed of Chinese gold coins, with one coin fixed within the mouth so it will always stay in place. It is linked to the moon and associated with monetary gain, wealth and good health. Chinese legends say that the Money Frog was the wife of one of the Eight Immortals. She was being turned into a frog as punishment for stealing the peach from heaven. Naturally greedy, she craves for money and wherever people see a Three Legged Frog, there is prosperity to come. Since ancient China, this mythical Money Frog protects against misfortune and brings good fortune and wealth to the household. The money frog is usually placed near cash registers or if in the home, is best kept in the corner diagonally across from the entrance to a room. The corner of a room is known to be the focal point where chi gathers. The Money frog is placed in these corners to activate what is traditionally believed to be the "Wealth Luck" of the household. Also, placing the frog inside the front door facing inwards symbolizes money coming in to the home or business. The back of the Money Frog often shows 7 diamond dots depicting the Ursa Major Stars (Great North Pole 7 Stars). Chinese Astrology is based on these seven stars. These same 7 stars coupled with 2 hidden supporting stars in the Northern Skies represent the famous 9 Stars of the Bagua.