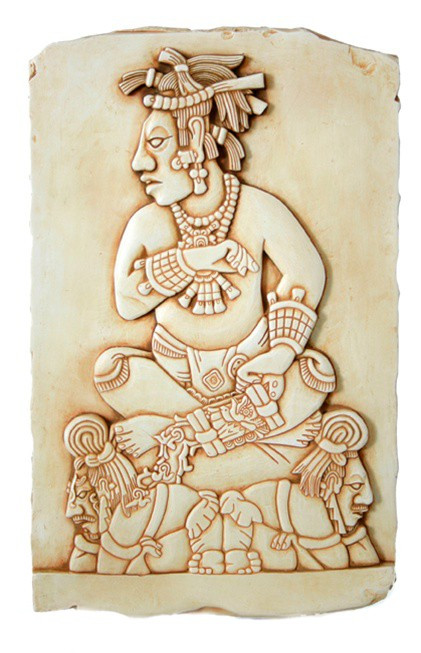 Mayan Tablet of The Slaves Wall Relief from Palenque

Mayan Tablet of the Slaves and the Military Chief of Pacal from The Palace of the Governor, Palenque, Mexico, around 620 A.D.

This Maya art reproduction is a portion of a larger relief that depicts a ceremony celebrating the retirement of King Pacal’s military chief. In the full relief, the chief is shown with his parents, of royal blood, as they are shown presenting him with offerings of important emblems of social status. The details from the relief highlights the chief';s accomplishments as a superior warrior. He is seated on a throne of human captives, which in Mayan culture was a symbol of his great warrior success. It was during the period of Pacal reign, Palenque reached the height of its development and expansion, during which Pacal expanded Palenque';s power in the western part of the Maya states, and initiated a building project at his capital that produced some of the finest art and architecture of the Mayan culture and civilization.