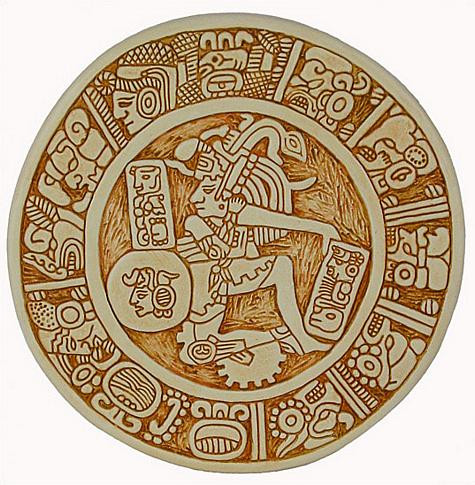 Surrounded by hieroglyphs, an ancient ball player demonstrates his skill and strength. The player's ability to manipulate and move the ball into stone rings, without the use of hands, was played to honor the gods with skill. The ball game represented the movements of the heavens for many pre-Hispanic peoples and, for the Maya, the game (called Ulama) had a religious significance. The ballplayer's solar headdress identifies him as one of the Hero Twins from the Maya epic Popol Vuh. It is generally believed that there were probably two version of the ball game. One was played as a sport, and probably had some betting involved. The other version was a religious re-enactment of the story of the Hero Twins in the Popol Vuh. In this case, there were probably only 2 players and the winner and looser were pre-determined. The looser was probably a captive, or a criminal. He would have been in terrible physical condition from going a long time without food. Perhaps he was even drugged. His purpose was to make the other player look good, probably a war hero or a young prince. People would have come to this event to cheer on the hero and deride and humiliate the captive, meanwhile preserving the ancient story of the Hero Twins.