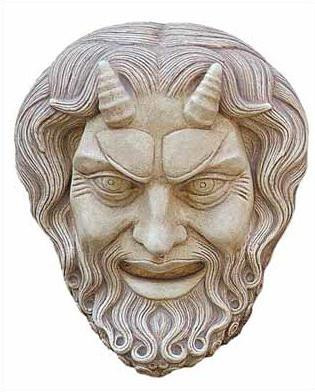 A God of shepherds and flocks, he was depicted with a reed pipe, a shepherd's crook and being half-man half-goat, with horns, a goat's beard and goat legs. He personifies humanity's animal nature. He was a popular God, though never part of the official Olympian pantheon. Pan has much in common with Dionysos in that he is associated with wine, sex, and passion in general. A Homeric hymn says that he was the son of Hermes by a daughter of Dryops. Pan's mother was frightened by her monstrous offspring, so Hermes took him to Olympus. The Gods were delighted with the child, especially Dionysos, and he was given the name Pan because he made them all happy. (In Greek, Pan means "All").