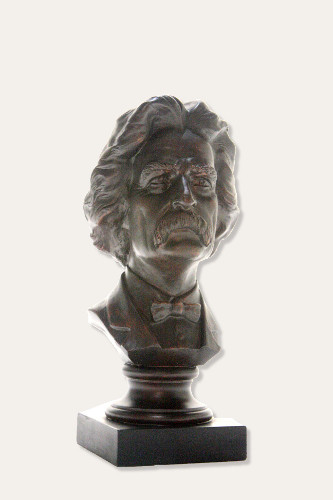 Mark Twain (1835-1910) was the pen name for the American born author and humorist Samuel L. Clemens. At age 12, Twain was forced to leave school and begin working due to the death of his father. He began a printers apprenticeship at the Hannibal Journal, a newspaper owned by his brother, Orion. Soon, he began contributing articles and humorous sketches. Eventually, Twain journeyed to New Orleans where he found work on the waters of the Mississippi as a licensed river boat captain. It was during this five-year period that Twain met many of the people that served as inspiration for characters in his novels and short stories. Twain wrote and traveled extensively for a number of years before marrying Olivia Langdan in 1870 in Elmira, New York. Later Twain and his wife moved to Hartford, Connecticut where she gave birth to the couples three daughters and he completed his greatest works: Adventures of Huckleberry Finn, The Adventures of Tom Sawyer, and Life on the Mississippi.