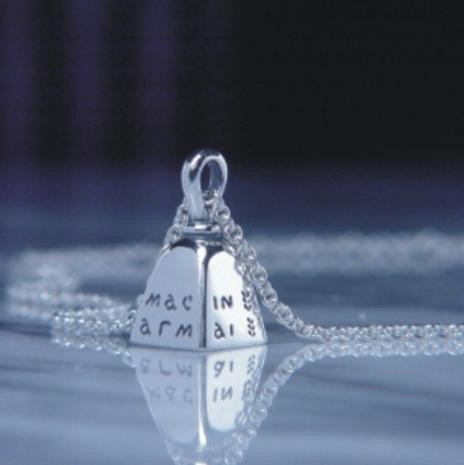 Magical bell with an inscription to ward off evil. 18 inch. Italian, 19th century, from a classical original Department of Medieval & Modern Europe, The British Museum.

The original in the collection of the British Museum from the Hull Grundy Gift is Italian, probably Roman, dated to the last quarter of the 19th century.

The bell was an exact copy, although on a much smaller scale, of an ancient engraved gold bell discovered on the Esquiline Hill in Rome. A two-line inscription in Greek characters appears on the four sides of the bell, each line ending in palmette.

The ancient inscription docs not translate precisely. What can be deciphered indicates that die words are meant to be a magical charm to ward off or reflect evil thoughts and intent.

The 19th century bell was originally owned by Castellani a famous jeweler of the period, who collected jewelry extensively both ancient and intriguing pieces such as this "magical" bell.