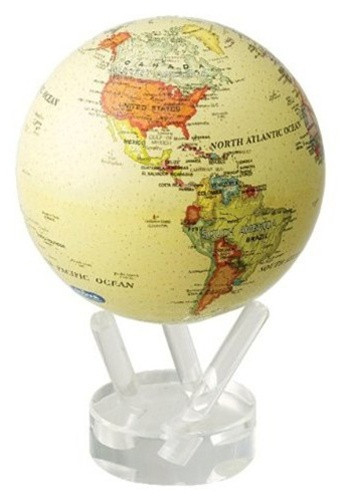 The MOVA-MUSEUM globe rotates silently and is inspired by the earth itself. It requires no power cords or batteries. . .only the natural light of your home or office. Our three- fingered acrylic base is included with every MOVA-MUSEUM globe. We also offer additional base models, or you can place the MOVA-MUSEUM globe on the base of your choice.

Technology Brief on the MOVA-MUSEUM Globe

You know that its an optical illusion, but how do we create that illusion? And, how does the globe turn without batteries or wires, in a completely sealed and fluid-filled environment?

The "technology brief" below will explain in part some of the new technologies developed to get the MOVA-MUSEUM globe to turn when you turn on the light switch.

•Low-light solar cell technology -- The solar cells are placed inside the globe and behind the globe graphics. Most of the ambient light is blocked by the graphics. To produce useful electrical energy from such a low light, these solar cells have to be specially designed and tested.

•Ultra low friction motor design -- at least an order of magnitude lower friction than current motors used for consumer applications. This makes it possible for the motor to turn, in complete silence, with extremely low power in the micro watt range (a micro watt is one millionth of a watt).