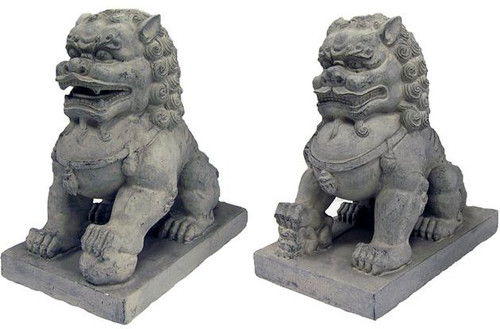 Foo Dogs or Chinese guardian lions or Imperial guardian lion, traditionally known in Chinese simply as Shi, are a common representation of the lion in pre-modern China. Statues of guardian lions have traditionally stood in front of Chinese Imperial palaces, Imperial tombs, government offices, temples, and the homes of government officials and the wealthy, from the Han Dynasty (206 BC-AD 220), and were believed to have powerful mythic protective benefits. Pairs of guardian lion statues are still common decorative and symbolic elements at the entrances to temples, gardens, entrances and homes and are considered protectors of buildings and guard against evil spirits. The lions are always depicted in pairs. When used as statuory, the pair would consist of a male resting his paw upon an embroidered ball (in imperial contexts, representing supremacy over the world) and a female restraining a playful cub that is on its back (representing nurture).

NOTE: Possible Additional Process Time. This Item might require an additional 1-2 days in addition to the Selected Delivery Time.