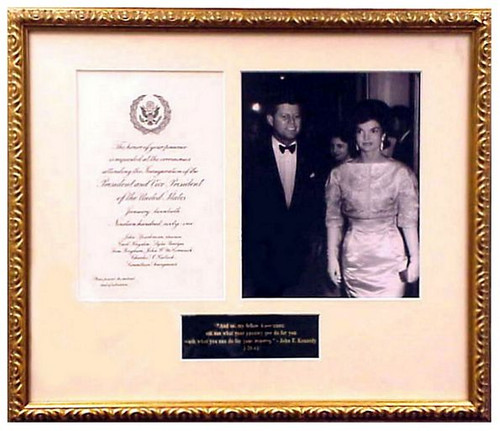 On January 20th, 1961 John Fitzgerald Kennedy was sworn in and became the 35th President of The United States.

From the very beginning of Camelot comes this original elegantly embossed official invitation to "the ceremonies attending the Inauguration of the President and Vice President of the United States, January Twentieth Nineteen hundred sixty-one", featuring a black & white Presidential Seal.

This original JFK collectible measures 6 " by 10" and is beautifully matted and framed with black and white photo. Framed it measures over 21 x 18" and arrives with a Certificate of Authenticity.

21"x18"x1", Original with Certificate of Authenticity