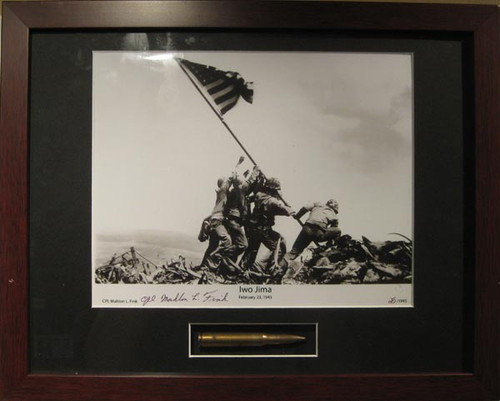 The Battle of Iwo Jima was a battle in which the United States fought for and captured the island of Iwo Jima from the Empire of Japan. The battle was immortalized by Joe Rosenthal's photograph of the raising of the U.S. flag on top of Mount Suribachi. This famous photograph is entitled Raising the Flag on Iwo Jima and was taken on February 23, 1945. It depicts five United States Marines and a U.S. Navy corpsman raising the flag of the United States on the fifth day of the 35-day battle. Print is personally signed by Iwo Jima survivor Mahlon L. Fink and contains an authentic M1 Garand 30cal bullet. Certificate of Authenticity included.