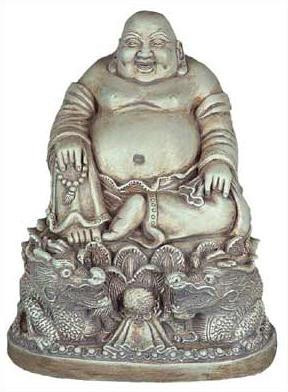 Often called the Happy Buddha, he is really Hotei, a monk of the T'ang Dynasty. He was known for carrying a sack of candy which he handed out to children in the street. Many Chinese Buddhist believe he was an incarnation of the Buddha Maitreya. Gautama Buddha was born in 563 b.c. in northeast India. The Buddha was the son of the King of the Sakyas. Suddhodana, who ruled at Kapilavastu, on the border of Nepal. His mother was Queen Maya. He was named Siddhartha.