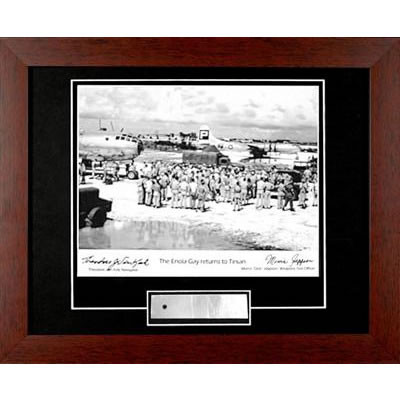 On August 6, 1945, during the final stages of World War II, the Enola Gay became the first aircraft to drop an atomic bomb as a weapon of war. It was from the island of Tinian that the bombers from the 509th Composite Group carrying the atomic bomb "Little Boy" were launched against Hiroshima. After the launch, Enola Gay returned safely to its base on Tinian to great fanfare on the base. This photograph is signed by Enola Gay Navigator Theodore "Dutch" Van Kirk and Weapons Test Officer Morris Jeppson. Print is matted to include a piece of B29 metal skin relic. Certificate of Authenticity included.