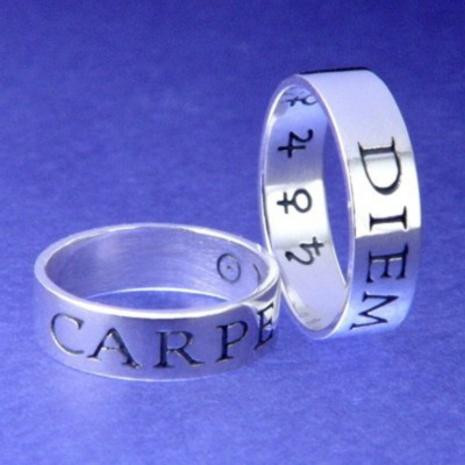 Quintus Horatius Flaccus, born in 65 BC, whom we call Horace, is among the greatest of the Roman poets. Of his vast corpus of work this short Latin invocation to take action has almost entered the English language itself. From the Odes Book I.11 the complete quotation reads: While we speak, Time has been running, Seize the day, and trust as little as you may for tomorrow. The interior is engraved with the symbols of the Roman days. The history of these symbols and their use is a fascinating one. For example, Mercury';s Day, in Latin dies mercurii, the day of the Roman messenger god, gave way to his Norse equivalent Woden. However, his name lived on in English as the symbol became used by astrologers for the planet Mercury, and the medieval alchemists also used the same symbol to denote the poisonous liquid metal, mercury. Today, someone who is quick, alert or fast, may be said to be mercurial, no doubt someone who seizes the day.