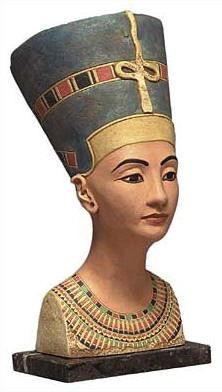 Nefertiti means "the Beautiful one is Come". The bust of painted limestone was found by the German professor Borchardtt in 1912 at Tel-El-Amarna, ancient Akhetaton, which was the King's new capital in Middle Egypt in what used to be the workshop of the sculptor, Thuunes. Nefertiti was the daughter of a high dignitary of the Pharaoh's court. She was the wife of King Akhenaton who ruled from 1379 of 1362BC. She was an influential Queen but she is principally remembered for her personal beauty and the lovely statue that was carved centuries ago. Details of the life of the beauteous Queen are veiled by the mist of time. One of her six daughters was Ankhesenamun, Tutankhamun's wife. Her tomb has never been discovered. Nefertiti's bust was taken out of Egypt to Berlin under unclear circumstances.