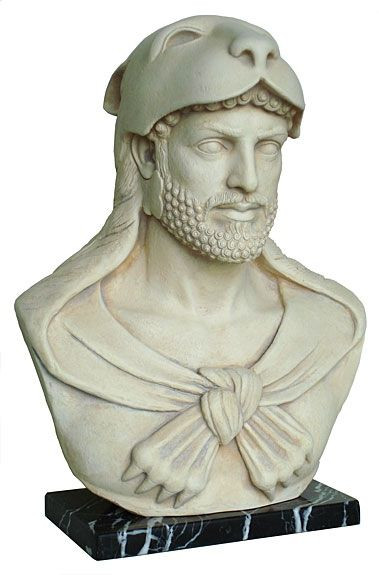 Hercules, Herakles in Greece, was the son of the mighty god Zeus and the mortal Alcmene. The goddess Hera, wife of Zeus, was hostile to the youth who had been fathered by her husband out of wedlock. She sent two serpents to destroy him, but even as an infant in the craddle Hercules strangled the serpents, demonstrating the power that was to characterize his life. Hera's jealousy did not abate. After his marriage she drove him into an anger that caused him to kill his own children. For that rush act he was forced to do penance by serving Eurystheus, king of Mycenae, and performing twelve tasks of superhuman difficulty. They began with the slaying of the Nemean lion with his own hands. Ever afterward he wore the lion's skin which is his symbol. As further tasks he slew the Hydra and Stymphalian birds, captured the cyrynean stag, the Erymanthian boar, the Cretan bull, the oxen of Geryon, and the wild horses of Diomedes, seized the beautiful girdle of Hippolyta and the golden apples of the Hesperides and as a final labor brought back the three-headed dog Cerberus from the underworld.