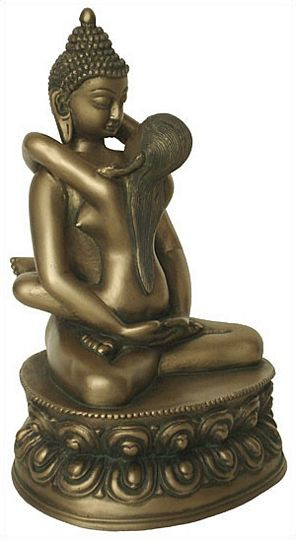 This sculpture shows vajradhara in his tantric aspect in embrace with his consort, Shakti, in a position of sexual union known as Yab-Yum (literally Father-Mother) in Tibetan and Maithuna in Sanscrit, or Prajna. Vajradhara represents the original, primordial Buddha, the one absolute power which creates itself, with no beginning and no end. This depiction represents a fundamental concept of Buddhism, the union of the male representing compassion with the female representing wisdom, this marriage leading to enlightment. Vajradhara is seated in a meditation pose wearing a crown on his head. He holds a thunderbolt (Vajra) in his right hand representing the male aspect of skillful means and method. In his left hand, he holds a bell (Ghanta) representing the female aspect of supreme wisdom, the two together symbolizes the union of the male and female aspects which leads to liberation and enlightenment. Shakti holds a ritual curved knife (Kartika) in her right hand symbolizing the severance of ignorance and all material and worldly things. In her left hand, she holds a skull cup (Kapala), used in tantric rituals for offering sacrificial meat or blood to protective deities.