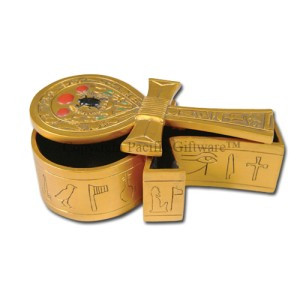 Only Kings, Queens, and Gods were allowed to carry this symbol. The ankh is the Egyptian sign of life and indicates that the King or God holding it has the power to give or take life away from lesser mortals. The Ankh, as a symbol of the life giving elements of air and water, was often used by a God or Goddess who holds the ankh before the Kin';s nose, giving him the "breath of life" or as streams of water in the form of ankhs running over the King during ritual purification. This ankh is decorated with the "djed" pillar and the dog-headed "was" scepter. The djed pillar was a symbol of stability and was considered the backbone of the God Osiris. The was scepter was a popular symbol for the Gods to hold and means well-being and happiness. The kneeling figure on top of the djed pillar is the God of "millions of years" holding branches in his hands.