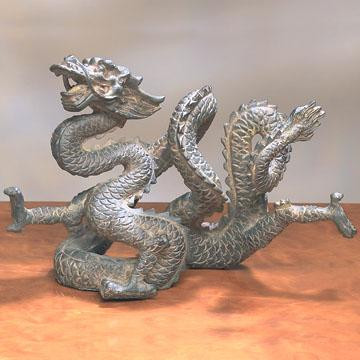 In Chinese myth, dragons originated as rain deities. The dragon is said to live under water half of the year, rising into the sky during the spring when the constellation of the dragon is at its height. Dragons are symbols of authority, fertility, goodness and strength, and the benevolent bringer of wealth and good fortune. Dragons were regularly invoked in time of drought, and the Dragon Dance that is still performed at Chinese New Year festivities today originated as a ritual to encourage rain. Though they were powerful creatures capable of doing great harm, they were generally portrayed as protectors, guarding treasure, temples, or even Heaven itself, keeping watch over waterways, clouds and rains. Their image of beneficent power was appreciated by China's rulers, who appropiated the dragon as an imperial symbol. The emperor occupied the Dragon Throne, wore dragon robes and even slept in the dragon bed. Chinese people sometimes referred to themselves as children of the dragon.