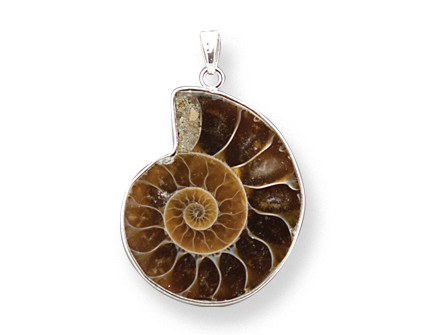 Wear an Ammonite. This Ammonite necklace is half the split ammonite polished on one side. Ammonites first appeared in the seas 415 million years ago. During their evolution three catastrophic events occurred. The first during the Permian (250million years ago), only 10% survived. They went on to flourish throughout the Triassic period, but at the end of this period (206 million years ago) all but one species died. Then they began to thrive from the Jurassic period until the end of the Cretaceous period when all species of ammonites became extinct. During I medieval times ammonites were believed to be petrified snakes.

Genuine Fossil necklace made from a split ammonite fossil. As these are actual fossils, size, dimension and color will vary. Packaged in a 2" x 3" plastic display box with foam insert and information card. WARNING: CHOKING HAZARD - Small parts - Not for children under 3 yrs. Adult Supervision Required.